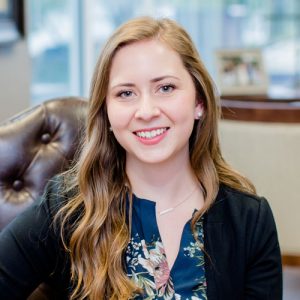 Native to Knoxville, Lauren grew up in Powell, and later decided to plant permanent roots in North Knoxville when she purchased her first home.  Her affinity for older homes drew her towards the historic neighborhoods in town, and she decided on a 1930’s craftsman off Fairmont Boulevard. Coincidentally, she later found out that her kindergarten teacher was a former owner of the very same house she now calls home. After that, she was sold… literally.

Lauren completed her associate’s degree at Pellissippi State, while also working as a legal assistant in several of the city’s leading law firms. She continued to work in the legal industry after she graduated but in time realized her true passion was helping others become homeowners in the neighborhoods she loves. Her work in the legal field has given her an edge when it comes to reading and understanding contracts, as well as overall negotiation skills. She takes great pride in being an advocate and an ally for her clients.

Lauren has a heart for historic homes and buildings. She believes they are one of Knoxville’s greatest treasures is passionate about preserving them. In addition to showing houses, you can also find her attending historic home tours around Knoxville. She also spends her free time hiking with her two Australian Shepherds, checking out new local breweries and restaurants, or hosting weekly potluck dinners with friends.

"Fantastic! Lauren was highly responsive and professional. I could not have asked for a smoother process."

"Lauren ... did an impeccable job. She was attentive, available, quick to find out answers, quick to solve them, great communicator and everything made perfect sense."

"Lauren was so fantastic to work with!! As a first time home-buyer she really made me feel comfortable and like she was asking all of the right questions on my behalf! Would recommend her to any of my friends or family in a heartbeat!"